Overview of the Software Architecture¶

The information in this document is not needed to use AutoNLU. It describes layers and the states that AutoNLU builds upon and is intended for developers working on AutoNLU. It might nonetheless be interesting to users of AutoNLU as well to understand certain design decisions.

Bottom Up Hierarchy of AutoNLU¶

A module is a class which inherits from Callback (you can use autonlu/core/modules/00_moduletemplate.py as a starting point). Each module implements a number of callback member functions that are called at specific times during training or inference by Classifier. e.g. on_epoch_begin will be called if a new epoch is started, on_model_save is being called before a model is saved etc.

The individual callbacks have a way to get information about the whole system and also to update the state of the system.

Information can be obtained by specifying arguments with the correct name. 00_moduletemplate.py mentions which arguments are available.

For example: In a module, we would like to lowecase all sentences from the current batch before it is being sent to the machine learning model. We select the callback on_batch_begin, which will be executed before the batch will be sent through the system. The corresponding member function from 00_moduletemplate.py looks like this:

If we want to have access to the sentences of the batch (x) in our function, we can just mention it in the signature:

All arguments that are mentioned in earlier callbacks can also be used in later callbacks. So we could also mention e.g. modeltype which was mentioned in before_model_load.

So how do we update which sentences are actually being used for the next batch by the system? From each callback member function we can return a dictionary that contains updates to specific values. What values will be updated is also mentioned as a comment in 00_moduletemplate.py (# Written back: ). In general, arbitrary dictionaries can be returned, but only the mentioned values will be updated immediatly for the Classifier. Other modules with the same callback will get the updated values immediatly though. So our callback becomes:

A callback function can also return arbitrary key/value pairs that are not yet used for anything. This can be used as a loosly coupled way of communication between modules. For example, we could give other modules the information that our module lowered all the sentences by registering a new value:

Other modules can then request this value and react to it accordingly. When requesting non-standard information (which might not be there if a specific module is not currently used) it is generally a good idea to give a default value of None and check for it. For example, another module might want to know in on_batch_end (after the batch has been sent through the model) whether the sentences were lowered, so we could write:

We have just been talking about callbacks which are used at specific points during training/inference/model loading etc. but there is also a second form of callbacks we have named value callbacks. A value callback is being called if a specific value has been updated by a module (even if it was updated to the same value it had before). E.g. our module might want to react to a change in the batchsize. This can be achieved by registering functions in the self.val_callbacks dictionary.

The CallbackHandler has two functions: 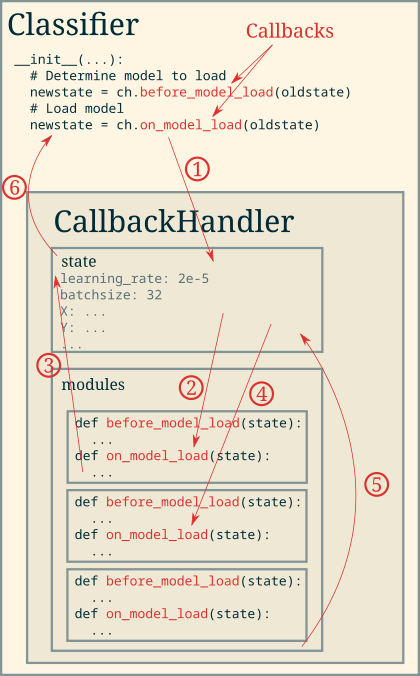 In practice, the calles in Classifier look like this. self.ch is the callback handler. Values that should be updated in the internal state dict are passed as named arguments to the callback. The updated values are returned in the same order as a tuple.

In practice, the calles in Classifier look like this:

self.ch is the callback handler. Values that should be updated in the internal state dict are passed as named arguments to the callback. The updated values are returned in the same order as a tuple.

Although only three values are being passed into the callback, the callbacks of the modules still can request all information that is in the state dict

Advantage of this architecture¶

Most of the functionality of AutoNLU is implemented in such modules, even the actual training step (calculating the gradient and updating the weights using an optimizer) are implemented in modules and are not part of AutoNLU or the Classifier itself. This makes it very easy to replace components. Other examples of modules:

This architecture makes the core of AutoNLU extremely flexible and allows new ideas and research results to be implemented without having to change and increase the complexity of the core.

This keeps the actual system that is used for production very clean, even if hundrets of different pre-processing stepts, data augmentation schemes, training improvements, …, are implemented and can be used (also in combination) at a moments notice.