When using AutoNLU in a script, or from Jupyter, it is recommended to use the autonlu.Model class which supports all functionality and settings that autonlu.SimpleModel offers, but with a much easier and comfortable interface. If you are integrating AutoNLU in an existing software system, you might want to have a look at autonlu.DocumentModel which offers a document centric API.

We will only give an overview over the most important features and use cases of AutoNLU in this document. For more in-depth information and for executable examples please have a look at the API reference and the tutorials section respectively.

Before being able to use AutoNLU at all, you will need to prove that you have a valid licence. The easiest way to do this is to use autonlu.login(), but this can also be achieved by setting the environment variable DO_PRODUCT_KEY. See Before First Use for more information. A minimal working example might therefore look like this:

Models can be loaded by specifying what model to load when creating the autonlu.Model class. You can specify either a base model that is used as a starting point for training or a model that was already trained on a specific task to predict new data. The following options are supported:

You should be aware, that the model is only loaded once you call predict/train/finetune on it.

Once an already trained model has been loaded, or a model has been trained, new texts can be predicted with it using the autonlu.Model.predict() method. A model automatically knows what task it was trained on and will give its results in the same format that is used as the training target Y and depends on the task the model was trained for.

To show a progress bar during prediction, the option verbose=True can be passed to predict (and to basically all other methods of autonlu.Model).

If you would like to explicitly know the type of a model, you can use the autonlu.check_model.modeltype() function.

A model can be trained for a specific task by loading a base model and calling autonlu.Model.train(). The train command takes at minimum two parameters (X and Y), where X is a list of texts to train on and Y is the training target.

The training target can have three different formats, depending on what task (label-, class-, or classlabel-task) you want to solve:

You have a label task if you want to predict exactly one label for each piece of text. A typical use case would be sentiment analysis where you would like to assign one sentiment to each text.

You are training for a label task if the given Y consists of a list of strings, giving one label name for each piece of text in X.

You have a class task if you want to predict an arbitrary number of classes (from a given list) for each piece of text. A typical use case would be topic detection. A text can have none of the possible topics, but it can also have multiple topics.

You are training for a class task if the given Y consists of a list of lists of strings, giving a list of class names for each piece of text in X

Since it is very often the case that there will be a certain label which should be selected if no class is being mentioned (e.g. the NONE label in the previous example) you can specify a standard_label when creating a autonlu.Model. This standard label will be used for all classes that are not explicitly mentioned in Y. In addition, during inference, predictions with this label will be omitted from the result. With a standard label, the previous example can be rewritten as follows:

By default, AutoNLU measures the current performance of the trained model on an evaluation dataset in regular intervals and uses this information to decide when to stop training and which model should be used in the end. For this, the system needs an evaluation dataset, containing data that is not being used for training. If only X and Y are given, AutoNLU randomly splits off 10% of the training data for evaluating the model.

If you would like more control, you can manually specify an evaluation dataset using the valX and valY parameters of the train method.

To split a dataset, the function autonlu.split_dataset() can be used. If the input data is the same, it is guaranteed that the dataset will always be split in the same way. Multiple calls to the function can be used if an evaluation and testing set should be created.

Visualization of the Training Process¶

During training, AutoNLU automatically produces tensorboard logs that can be visualized. On the terminal go to the directory you started your script/notebook from. You should see a directory called tensorboard_logs, containing the tensorboard logs. Call tensorboard --logdir=tensorboard_logs and you should be given a url that you can open in your browser (usually http://localhost:6006/). You will be able to see different metrics, and how they change over time (e.g. training loss, validation loss and accuracy, used GPU memory, …) while the model is training. 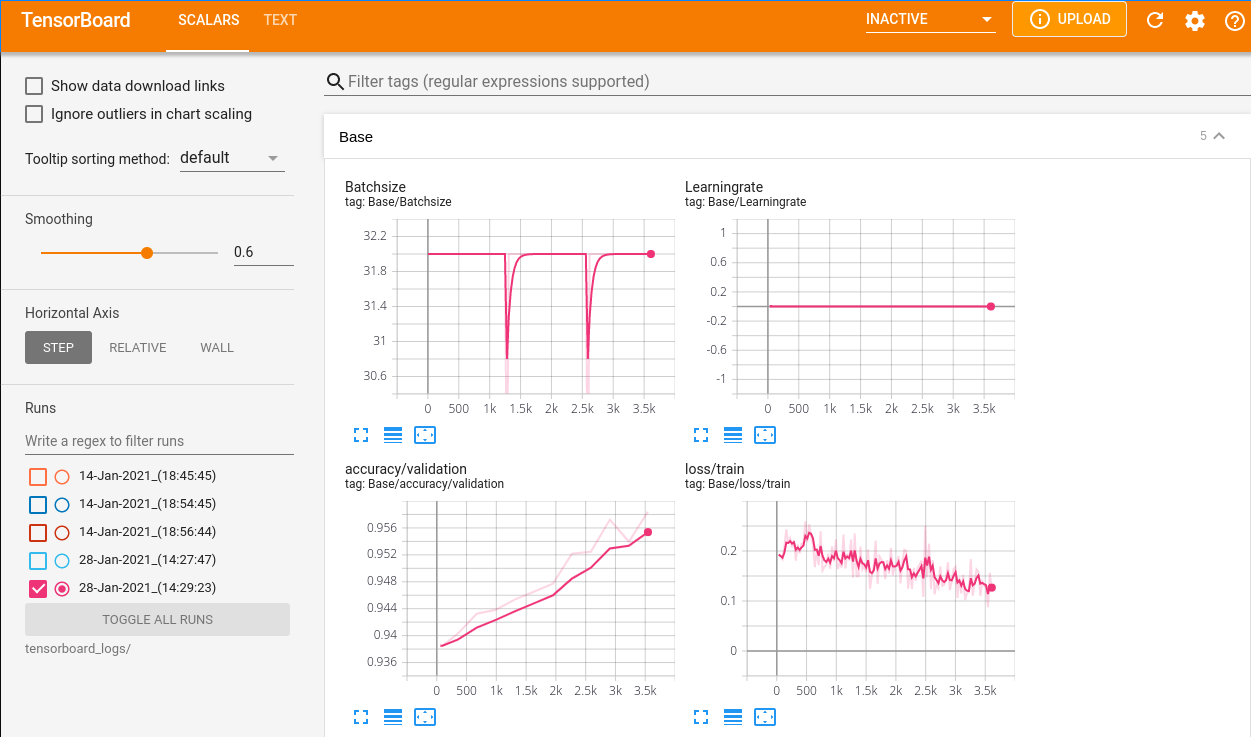 If there is enough text data available from the domain (or a closely related domain) of the task to be solved, an existing language model can be fine tuned further on this data. The data is required in the simple form of a text file where individual documents (e.g. reviews) are separated by two newlines.

A model can be fine tuned on this text file by using the autonlu.Model.finetune() method. Fine tuning has multiple steps:

Alternatively, one can specify a maximal time the model should be trained. This can be especially useful when using large text corpora and the time for even one epoch would exceed what is feasible.

Visualization of the Finetuning Progress¶

Tensorboard logs are also written during finetuning with the difference that the logs are saved in the directory runs. You will be able to see how the language modeling loss changes over time. As long as the loss in the graph (especially the Cumulative_Loss) is getting smaller, the language model is probably still improving (as long as the amount of text is sufficient so the model does not overfit). 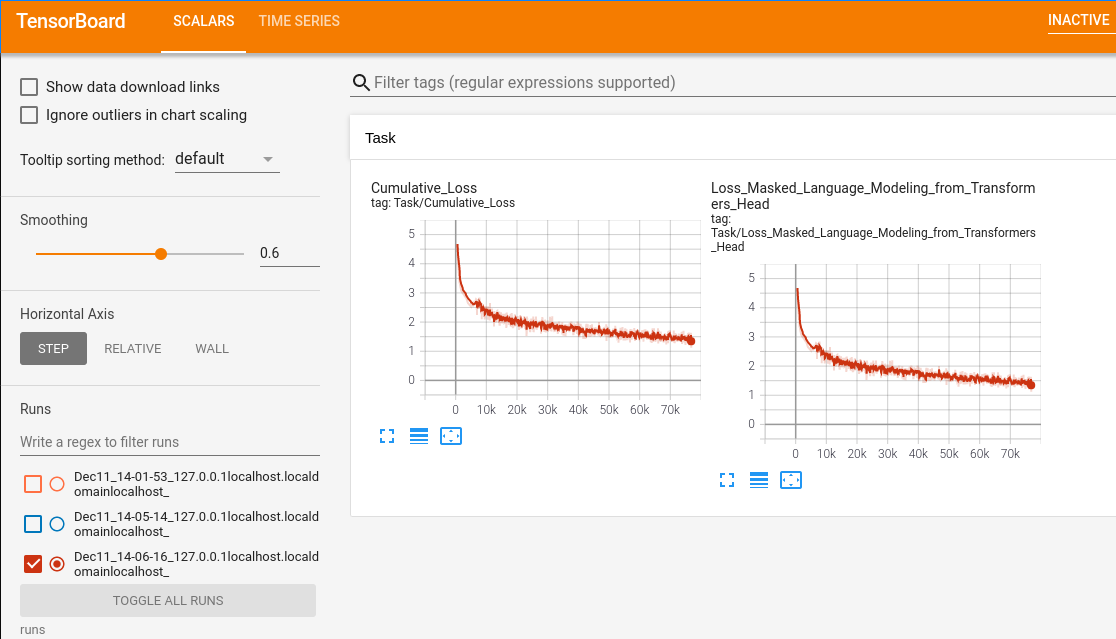 AutoNLU supports a process called active learning. Using active learning, you can ask an already trained model to select pieces of text that would provide the maximal amount of information to the system if labels for them would be available.

The general workflow using active learning looks like this:

Active learning is supported using the autonlu.Model.select_to_label() method. Have a look at the doc string of this method for a more in depth explanation of all the parameters.

A model can be saved at any time using the save method. If a model was only fine tuned, the saved model will be a base model that can be used to train a variety of tasks. If a model is saved after training, a task-specific model will be saved which can be trained further on the same task or used to predict data.

Sometimes, one would like to train a model using AutoNLU, testing different setting and base-models, but use Studio for labeling of the data.

To get annotations from Studio, you will have to know the project id that contains the annotations. The easiest way to find out the project id is to click on your custom project in Studio and look at the url. It should in part look like http://studio.deepopinion.ai/projects/33/ and the number after /projects/ is the project id.

You can get a list of all available annotations for this project by calling autonlu.list_annotations() and giving the project id as an argument.

To get annotated data from Studio, use the autonlu.get_annotations() function and pass the project id. The data is already returned in a format that can directly be used to train a autonlu.Model.

If you would like to exclude some annotations, you can pass a list of the ids to exclude with the exclude parameter. The annotation ids can be determined using autonlu.get_annotations()